Patrick Sweeney is better known as the “Fear Guru”. In this episode taped live at the Spartan Media Fest in Lake Tahoe, we explore how to help your kids embrace fear and move past it using the “logic brain” rather than the “lizard brain”. Often it starts with a shift in mindset, then actions follow. Those times of change become milestone moments that alter everything and you’re never the same again. That moment came for Patrick Sweeney minutes after almost losing his life against a rare case of Leukemia. For years, Patrick had worked hard building technology companies and earning millions. He’d reached the pinnacle of success, but he wasn’t happy.

As a typical over-achiever, Patrick took on the world in his 20’s training for the USA Olympic team in rowing, and then took on the business world in his 30’s and 40’s. Patrick launched, funded and sold multiple companies in the technology space but 75 hour weeks and pushing his body to the limits left him feeling exhausted and unfulfilled.

In one moment, Patrick walked away. He’d just fought for his life on an operating table against a rare case of leukemia. In that moment of perspective as he stood outside the hospital, he decided to fight the fear of the unknown and embrace a different future. One that would bring fulfillment, joy and happiness.

In that moment, Patrick unlocked a new passion for adventure. As he systematically approached the things he feared and avoided, he unlocked greater levels of success and happiness in his own life. Out of that came the start of a fear framework. Today, he climbs mountains, breaks world records and travels the world speaking on taming fear and unlocking peak performance. His mission: help thousands of people make amazing transformations.

From Olympic level athlete turned tech entrepreneur to full time adventurer and fear guru, Patrick Sweeney is a testimony to the power of fear and focus. 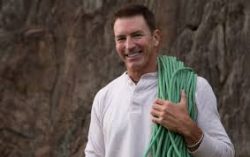